The amount of data produced on daily basis has steeply increased in the last decade, driven by widespread adoption of mobile devices, conversion of media and other content to digital form, the rise in number of embedded devices and many other trends.

Organizations are collecting, storing and processing these data and use it in many ways, including:

Data scientists and others employ a wide range of approaches for analysis of their data. An important set of methods involves clustering or segmenting of data in groups of data points so that data points in the same group are very similar and at the same time distinct from data points in other groups.

Clustering belongs to the unsupervised machine learning algorithms, which means that there is no target variable to help in the learning process or in finding structures in the data.

Clustering is widely used in many different industries and sectors. Most common business cases include:

One of the most popular clustering algorithms available is the K-means algorithm, it is easy to implement and very efficient.

The K-means algorithm is an unsupervised machine learning algorithm that iteratively searches for the optimal division of data points into a pre-determined number of clusters (represented by variable K), where each data instance is a “member” of only one cluster.

K-means algorithm is distance-based, and its main objective is to minimize within-cluster sum of squares:

where C_i denotes centroid for cluster i, x_j data point j and w_ij is equal to 1 if point j is in cluster i and 0 otherwise.

K-means clustering belongs to the class of unsupervised learning algorithms. The main idea is to partition a group of objects in a pre-defined number of clusters in a way that objects in the same cluster are more similar to each other than to other objects from other clusters.

The algorithm to detemine the final set of clusters can be divided in the following steps:

1. choose k – the number of clusters

5. repeat steps 3. and 4. until the clusters members do not change anymore (no transitions between clusters)

Let us first generate a set of data points from multivariate normal distribution: 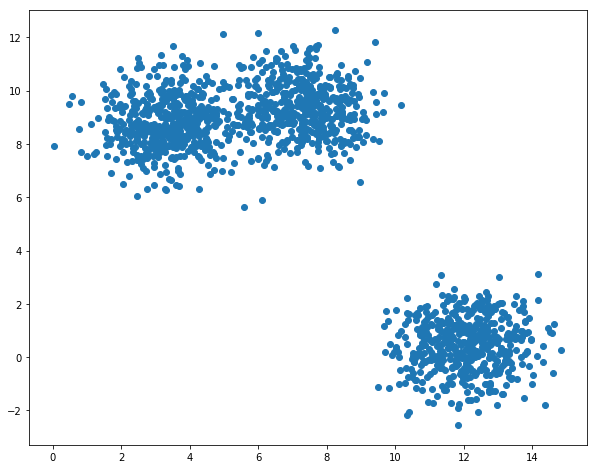 We need some functions to perform main steps of the algorithm:

Iterating through the algorithm:

and plotting the clusters with:

Although K-means algorithm is relatively easy to implement and very fast, it is important to be aware of its limitations. One drawback is that the results of the K-means algorithm are sensitive to initialization of centroids and we may not achieve the globally optimal solution.

Further, we need to provide in advance the number of clusters for the K-means algorithm, it cannot learn the value of this parameter from the data.

We will now in turn discuss these limitations of the K-means algorithm and how to address them.

Sensitivity of K-means to initialization of centroids

In our example above, we used a specific random seed (2) in randomly selecting initial centroids from among the data points. If we use a different random seed (1 instead of 2): 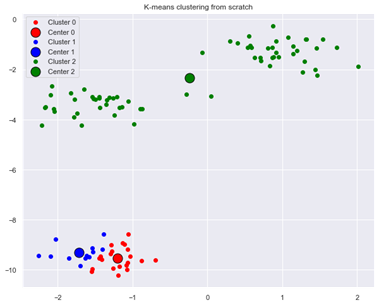 We can resolve the problems with suboptimal initialization of centroids in several ways. One approach is to run the K-means algorithm for several different starting centroids and select the one with the lowest inertia (within-cluster sum-of-squares). Scikit-learn implementation of the K-means algorithm uses by default 10 consecutive runs with different centroid seeds.

Another approach is to use an improved method for centroid initialization. The most known algorithm for selecting initial seeds is the k-means++ algorithm.

k-means++ algorithm seeds the initial cluster centres by selecting the first centre from among the data points. The 2nd and further centres are selected randomly from remaining data points, but with probability of selecting a data point being proportional to its squared distance to the nearest existing cluster centre. 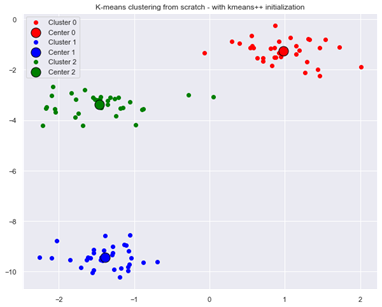 For reference, we are also adding code that uses alternative, Scikit-learn implementation of K-means algorithm:

As mentioned earlier, K-means algorithm encounters difficulties when used on non-spherical data. To illustrate this, we will generate two example data sets with the help of functions make_moons and make_circles:

We can see that our K-means algorithm using k-means++ initialization leads to clustering that is different from what we would intuitively expect:

When dealing with non-spherical data or other complex structures of data points, an improved clustering can often be obtained by using the spectral clustering method instead of K-means.

Spectral clustering converts the data into a similarity graph with each vertex in the graph representing a data point. There are several methods for transforming data points with pairwise similarities or distances into a graph:

Next step of the spectral clustering method is determination of the graph Laplacian and calculation of its eigenvalues and eigenvectors. We then cluster the points in this transformed space by using K-means or some other traditional clustering algorithm.

Spectral clustering algorithm is implemented in Scikit-learn, we can apply it to our problem with the following code:

obtaining an improvement in clustering for non-spherical data sets:

K-means algorithm requires only one parameter – K, the number of centroids or clusters. There are different methods available to determine the optimal value of K. One of the most common methods involves trying out different values of K, determining within-cluster sum of squares for each K and plotting the resulting relation.

This point is known as the elbow point and visually indicates the optimal value of K for the K-means algorithm.

Another method for determining optimal number of clusters for the K-means algorithm is the Silhouette analysis.

The silhouette plot shows how close a point in one cluster is to data points in the neighbouring clusters. It allows us to visually assess the parameters like the number of clusters. This metric has a range between -1 and 1.

Finally, let us examine another type of a clustering problem where the standard K-means algorithm may encounter difficulties and where a different method may be more appropriate: data with outliers.

Clustering of data with outliers frequently arises in the problem of anomaly detection. In this case, K-means algorithm ensures that each data point is part of one of the clusters, even though it may be an outlier.

What is required is an alternative approach and one of the possible methods to apply in such case is Density-Based Spatial Clustering of Applications with Noise or DBSCAN.

DBSCAN is a density-based algorithm that does not require number of clusters as parameter like K-means.

It extracts dense clusters of data points and identifies the remaining points as outliers.

DBSCAN is controlled by two parameters: